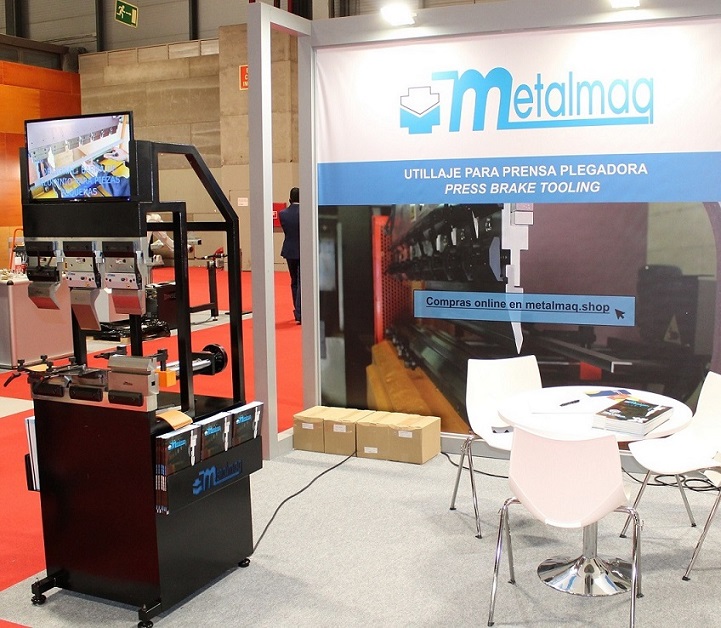 METALMAQ exhibited at the last MetalMadrid 2019 fair, which was held in Madrid on November the 27th and 28th of this year 2019.

For our company it has been the premiere as an exhibitor of MetalMadrid (since 1994 we are exhibitors without interruption at the BIEMH Bilbao fair) and we were pleasantly surprised by the type of “format” of this fair, with all the stands in structure (although of different sizes), the rear canvases with the same configuration and a rather informative fair, without too many machines or large investments in exhibition. Another surprising thing is the duration; Only two days !! …. although honestly, highly productive.

For this occasion we designed a small display (as you can see in the previous photos), to expose the following products that we manufacture ;

– SUPPORT-P for Protective Film, at the fair, its new finish was presented, which will be ready for sale shortly and has been anodized with a gray-blue color that our customers liked very much.

– Manual Back Gauge RPS-500/2; this gauge has been manufactured for three years and continues to surprise everyone for its robustness, reliability, practicality and especially for an unbeatable price.

– Fast clamp ST-50; the fast clamp for the Promecam system is barely two years old, but it is being a benchmark for its ease of use, its rapid installation, the enormous time savings that it makes to gain in the change of punches in the press brake and its price non-rival.

– NEW ST-100 Clamp for the front mooring of Promecam tools; the latter was an advance of the new product that will be released shortly and that is already creating a lot of expectation in all the clients to whom we had the opportunity to show how it works.

We also distribute the NEW Catalog 11th Edition, which presents, apart from the novelties mentioned above, an increase in photos and explanations on many products. QR codes have been published with the demo videos of our YouTube Channel and many more news that can be seen by linking this explanation.

The conclusions are; it is a fair that tends to be a reference in the Central and South-Central area of Spain, since, as many customers told us, they no longer go to the Bilbao fair – BIEMH and make a visit to MetalMadrid that they like closer. Actually these two fairs have polarized customers in Spain, but in my opinion, if MetalMadrid wants to be ambitious in this regard it would be interesting to make this fair every two years (not annual as before) and perhaps extend it to three or four days. This would allow the exhibitors to make a greater effort and exhibit with more meters, more machinery, equipment …… but anyway, this is just my opinion.

The feeling is that it has been a well used fair , in an unbeatable environment (the IFEMA pavilions), good organization and most important, that customers have made it an important fair in their calendars … … so; until the next edition !!